My immersion in the paddlesports industry has had many facets. One of these is river guiding, and this aspect just came full circle. But first, let me start at the beginning.

My guiding career started in 1994, after a memorable trip down the whitewater section of the Vaal River just downstream of Parys with my friends Riaan Steyn, Chris Pretorius and Chris Robberts. At the time, the four of us were racing and tripping as often as possible; we were obsessed with finding new rapids to run. On this particular trip on the Vaal, with the river running at 250 cumecs (considered a very high level at the time), we bumped into Matthew Hare of Hadeda Creek and some of his guides. They also took advantage of the high water to trip the river with crocs (South African two-man rafts made by Ark Inflatables). They were quite impressed by our skills, running these rapids with our flimsy racing kayaks, and Matthew dropped a hint that he was looking for more guides. Two weeks later, Chris Robberts resigned from the SANDF (Permanent Force) and became a full-time guide at Hadeda Creek, while the other three of us, all full-time students at Potchefstroom University, started a long period of freelance river guiding for various rafting companies.

From 1994 to 1996, I spent most weekends and holidays working at rafting companies, sometimes as guide, sometimes as safety kayaker. Most of this work was on the Vaal River, which gave us valuable experience in a broad range of conditions and with a large variety of clients. From super low water levels, dealing with all sorts of raft pins, entrapments and injured clients, to high water runs with big rafts and spectacular flips. The level of expertise amongst guides on the Vaal was very high at the time; everyone was heart and soul committed to the cause; it wasn’t just a job.

In 1997, I started working at Iscor as an engineer, and suddenly I had more money to travel, which meant my kayaking and guiding took me to many more rivers in other parts of the country. Apart from many kayaking trips, I ended up guiding on the Blyde, Sabie, Umkomaas, Tugela, Orange and some other rivers. Together with my guiding and kayaking friends, we pushed our own boundaries as well as those who were fortunate enough (or maybe unfortunate for some) to end up on our trips.

I also got to be involved in some truly special events. I spent a week on a flooded Umkomaas River, doing safety for the 1997 Raid Gauloises. The first trip we did on the section below Hella-Hella, a few days before the competitors arrived, is still the highest level I’ve ever paddled the Umko. For those who know the section, the pinnacle rock in rapid 5&6 was completely covered! In 1999, I was a safety kayaker for the Camel Whitewater Challenge, held in Augrabies Gorge. In the days leading up to the competition, our group of safety kayakers got to paddle the section of rapids below Oranjekom in Augrabies Gorge at different water levels, as the water rose from around 50 cumecs to 300 cumecs. Other memorable experiences from this period include guiding on a multiday trip through Onseepkans Gorge on the Orange at 800 cumecs, being a stunt kayaker for a Coca Cola Israel advert, doing safety kayaking for a German movie that was shot upstream and downstream of Augrabies Gorge, a few safety kayaking stints on the Zambezi River, and many more.

Everything changed at the beginning of 2000, when I left Iscor to become a full-time kayaking bum. I spent more than two years paddling rivers all over Southern Africa, while writing the guidebook “Run the Rivers of Southern Africa”. This was partly financed by guiding on many different rivers while I traveled. I also got to spend a few months in Europe, kayaking all around the Alps and guiding in Austria and Italy. The steep, continuous rivers in Italy, where we took clients down in big rafts with two guides per raft, changed my perspective of what can be done commercially. Back in South Africa, I got more involved in guiding multiday trips. Four-day guided trips on the Orange River, with the experienced guides from Kalahari Adventure Centre, led to a number of multiday raft-supported kayak trips that I led down a variety of rivers in KwaZulu-Natal and the Lowveld.

Looking back, I met most of my current friends as a result of these guiding exploits. Working with so many different rafting companies gave me a good view on what clients expect, what can truly be considered as industry standards and what should really be stayed away from. Doing courses with different instructors also exposed the differences in approach and content; from my first guiding course in the mid-nineties with Graeme Addison (widely considered to be the initiator of commercial rafting in South Africa, now running Riverman), to a trip-leader course with Hugh du Preez of Whitewater Training, a raft guiding course with Andrew Kellett of Gravity Adventures, and a raft guiding course in Italy with guys that I simply can’t remember the names of.

When I started my first kayak company (Fluid Kayaks) in 2003, my guiding days became less frequent, as my focus moved to multiday kayak expeditions with a close circle of kayaking friends when I wasn’t test-paddling new kayak prototypes.

Everything changed again when I started taking my two small children on river trips. I ended up organising and leading multiday trips on the Orange and Vaal Rivers, mostly with rafts for my kids’ safety (they were both only 16 months old when they went on their first multiday trips).

When I started my new kayak company, Vagabond Kayaks in 2018, with partners who all appreciate high-performance kayaks, I set out to design recreational sit-on-top kayaks that were super stable, but faster and easier to paddle than other sit-on-tops on the market, and with all the features and fittings that make extended trips possible. Since we launched our new range of kayaks a year ago, we’ve done a number of day trips as well as multiday trips on the Vaal and Orange rivers with our new kayaks.

After our last 4-day trip on the Orange River in June (yes, two months ago, in the middle of winter!), Lisa and I realised that we already had the complete package for running our own river safaris. I have extensive guiding experience, Lisa has extensive paddling and event organising experience, we have the perfect boats for running the type of trips that we would like to offer, and we know some great sections of river that no-one else is using for guided trips.

So a few days ago, our new venture was born: Paddle with Us. Yes, if you join one of our trips you will paddle with us, Lisa and myself. We are offering two-hour and two-day trips on the Vaal River outside Parys, and five-day trips on the Orange River. This is an exiting new adventure for me; I get to put my years of guiding experience to good use, I get to show some of my favourite sections of river to other people, and I get to do that with kayaks that I designed and manufactured.

When I started guiding 25 years ago, I never had it in mind to start my own river safari company. But here we are, full circle. Back then, it was just a way of getting paid to do something I love. Now, it is so much more than just that.

Naturally, most of my time still goes into manufacturing Vagabond’s kayaks, so we will not be running trips every week or every weekend. We’ve set specific dates for trips, as listed on our Paddle With Us website. If you’re keen to join on one of our trips but really can’t make the dates that we’ve set, please get hold of us (contact details here) to see if we can arrange a trip for a different date. 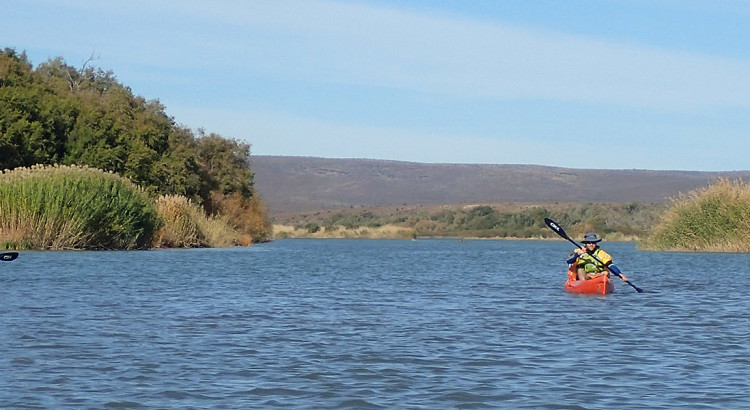 Most paddlers would like their children to paddle. Most paddlers are unsure of how to go about it, but they give it their best shot. Sadly, most paddlers fail.

Paddling is one of those rare sports that can be enjoyed from a very young age to a ripe, old age. For many, it is a lifestyle as much as it is a sport. Why do so few children get into paddling, and why do so many of those that do stop paddling when they finish school?

I have given this a lot of thought over the years, especially after my own children were born. The first question I often get asked when it comes to kids is: How young can they start?

There is no perfect age to start paddling. However, you can literally start getting them on the water as toddlers, as long as you do it safely. This may be an extreme example, but both of my kids went on their first six-day Orange River expedition – in a large raft – when they were 16 months old. For them, spending time on rivers is the most natural thing in the world.

END_OF_DOCUMENT_TOKEN_TO_BE_REPLACED

Kyla (11) and Ruben (8) are no strangers to outdoor life. They have done multiple expedition-style trips on the Orange and Vaal rivers, and camping has been a part of their lives since they were babies. Nonetheless, I knew that a 3-day backpacking hike in the Vredefort Dome during the recent school break with Lisa and myself would push their limits a bit. They were very keen when I mentioned the planned hike to them, and as the day of departure got closer, their excitement grew. I sensed some trepidation mixed with the excitement, which is a good thing. Going gung-ho into an adventure often backfires.

Each kid carried a little backpack weighing around 6kg, which included 2 litres of water. We managed to squeeze their self-inflatable matresses, clothing, breakfasts and lunches into their backpacks. Lisa and myself each carried a 2-person tent, and we also took the kids’ sleeping bags in our backpacks.

The route was put together by Lisa, using sections of her Forest Run route to give us a good blend of technical trails and jeep tracks. We went through beautiful forested kloofs and scaled a couple of koppie summits to enjoy spectacular views.